This editorial cartoon drawn by Bruce MacKinnon and published in The Chronicle Herald popped up in my Twitter feed this morning and I'm alternating between amazement, speechlessness, sadness, and fear for the U.S.A. 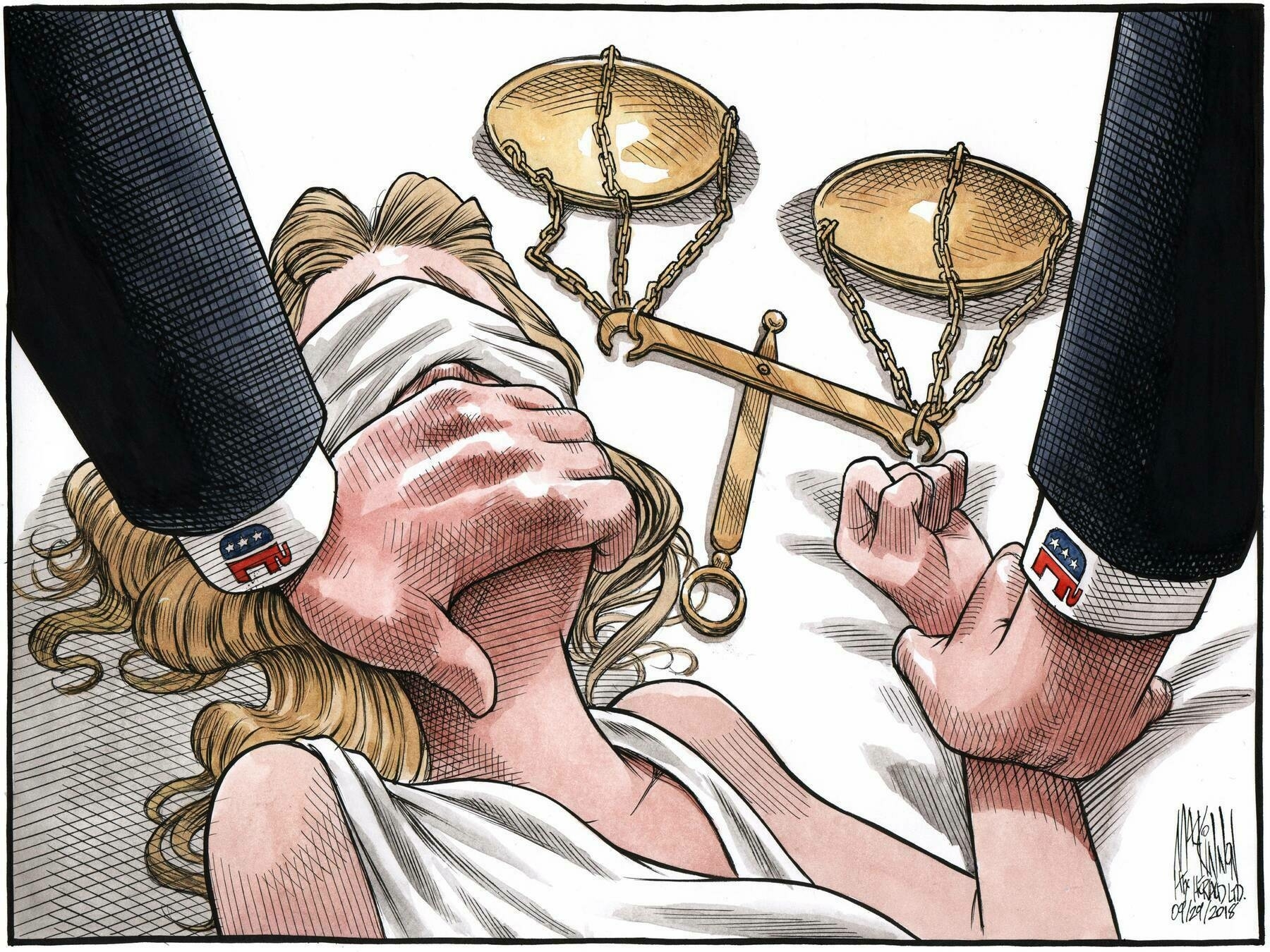 The cartoon shows the arms of a person pinning down the blindfolded Lady Justice on a bed, with a hand over her mouth, in reference to the accusation made by Christine Blasey Ford against Brett Kavanaugh, the Supreme Court nominee. The cufflinks of the abuser have the GOP's elephant on them.

I think this is an amazing piece of political satire, absolute genius. I'm German, I live in Germany, I'm only indirectly affected by what happens over there but the proceedings of last week, which were hard to ignore even over here, had me speechless so many times.
To me, it's inconceivable that the GOP props up a man for the highest judicial position in the country, who has had a number of credible accusations of sexual assault, and testimony of character leveled against him, that absolutely disqualifies him not just for the Supreme Court but for any position in the judicial system. And that doesn't even cover the frankly insane and disgraceful performance before the Judicial Committee which betrays a deep disdain for the rule of law, hatred towards women, and shows a complete lack of capacity for impartiality.

It's sad that U.S. politics is at a point where the Republicans, who have long been a danger to the U.S.A., are now willing to risk the last shred of independence of the Supreme Court to push through their agenda of hate, misogyny, homophobia, and shameless pursuit of power over other people, all of it driven by nothing but greed.

The fear that if Brett Kavanaugh is confirmed, the U.S. will deteriorate into an autocracy even faster, is very real and I sincerely hope that the people of the U.S. realise this and stand up before it is too late.

This morning I read about an interesting case the Supreme Court is going to decide very soon: "Gamble vs. US"
Some people on Twitter argued that the true reason the GOP and Trump want to push Kavanaugh into a SCOTUS seat, is so he can rule on the above case.
At its core, the lawsuit is about a weapon possessions charge and whether a defendant can be tried for the same charge by both state and federal authorities (so called "double jeopardy"). Several people argue that a decision to prevent state and federal authorities from prosecuting someone for the same crime, could mean that a federal pardon from Trump, might prevent state authorities from prosecuting a person and would thus minimise the pressure state prosecutors can put on defendants in cases linked to Trump.