After one visit to the local animal shelter and three walks supervised by a dog trainer, Bijou moved in with us one year ago today. 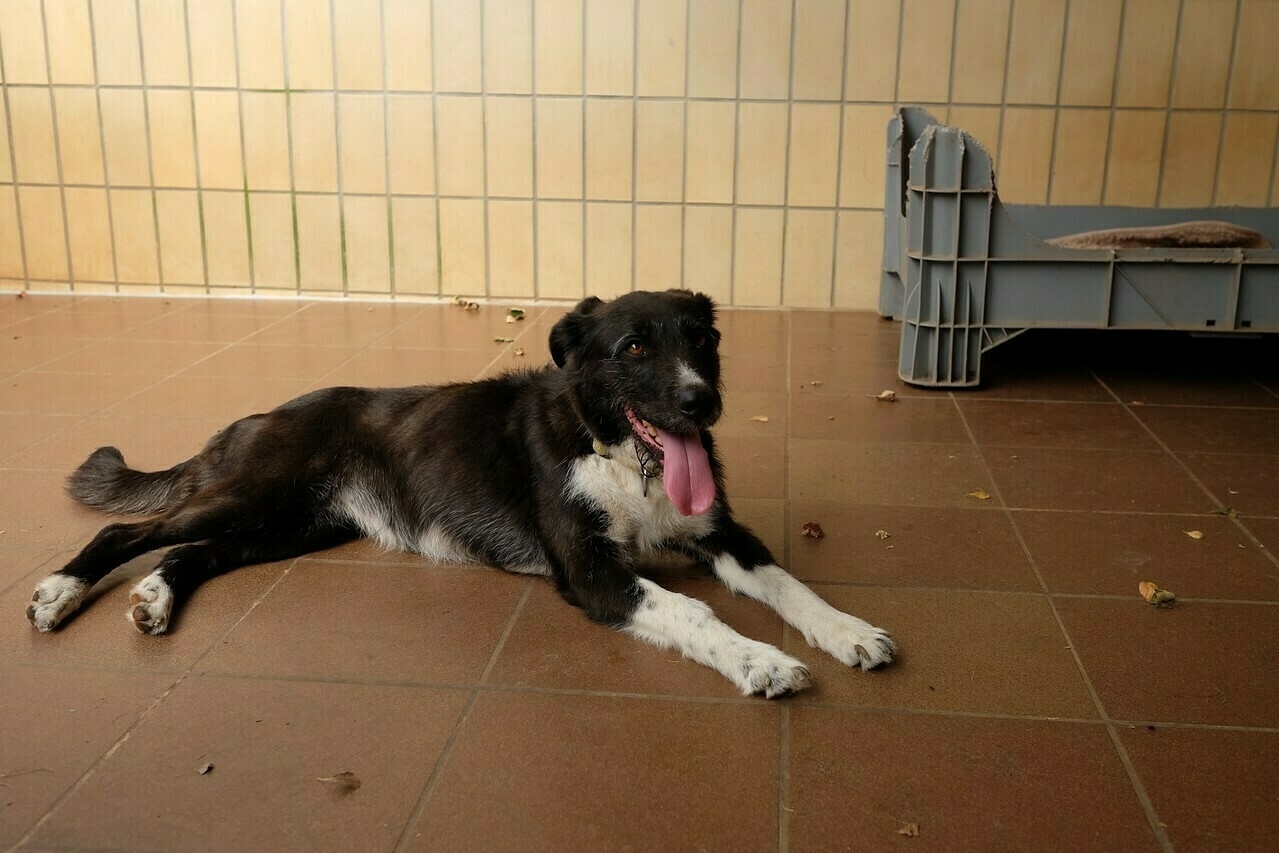 Bijou, the first time we met her at the animal shelter in Trier

The shelter didn't have much information about her and we were only able to piece together a little more: She supposedly was about seven years old when we met her, is a mix between a Border Collie and a German Wirehaired Pointer, has lived not too far from Trier with a woman for five years, who adopted her out of a French animal shelter when Bijou was not even two years old. When the woman died unexpectedly and no one in her family would take Bijou in, she ended up in the animal shelter in Trier. 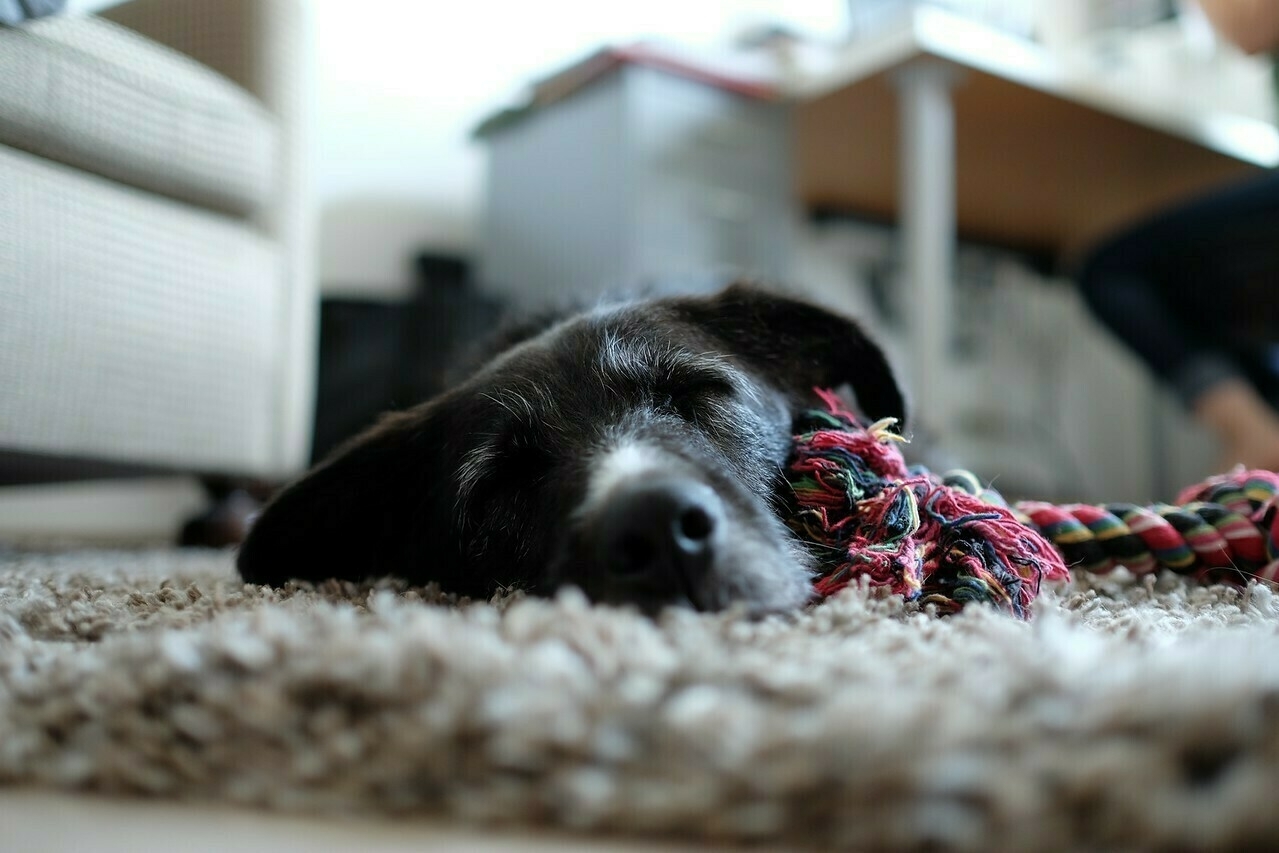 The day she moved in with us, completely exhausted

The first few months after the adoption haven't been without issues, what with the surprise that the spayed dog we picked up going into heat about a week after she moved in with us, the discovery that the reason for some of her crooked claws is a genetic disorder which thankfully hasn't resurfaced again, so far, and the surgery she had to go through in December 2015 to have her spleen removed because her vet discovered growing masses in it. Bijou after her spleen removal surgery, in a children's dinosaur onesie that we got her in lieu of an Elizabethan collar

The good thing is that Bijou didn't mind the frequent visits to the vet and quickly became the staff favourite at the clinic because she was so incredibly relaxed, never showing even the smallest signs of aggression during the examinations. 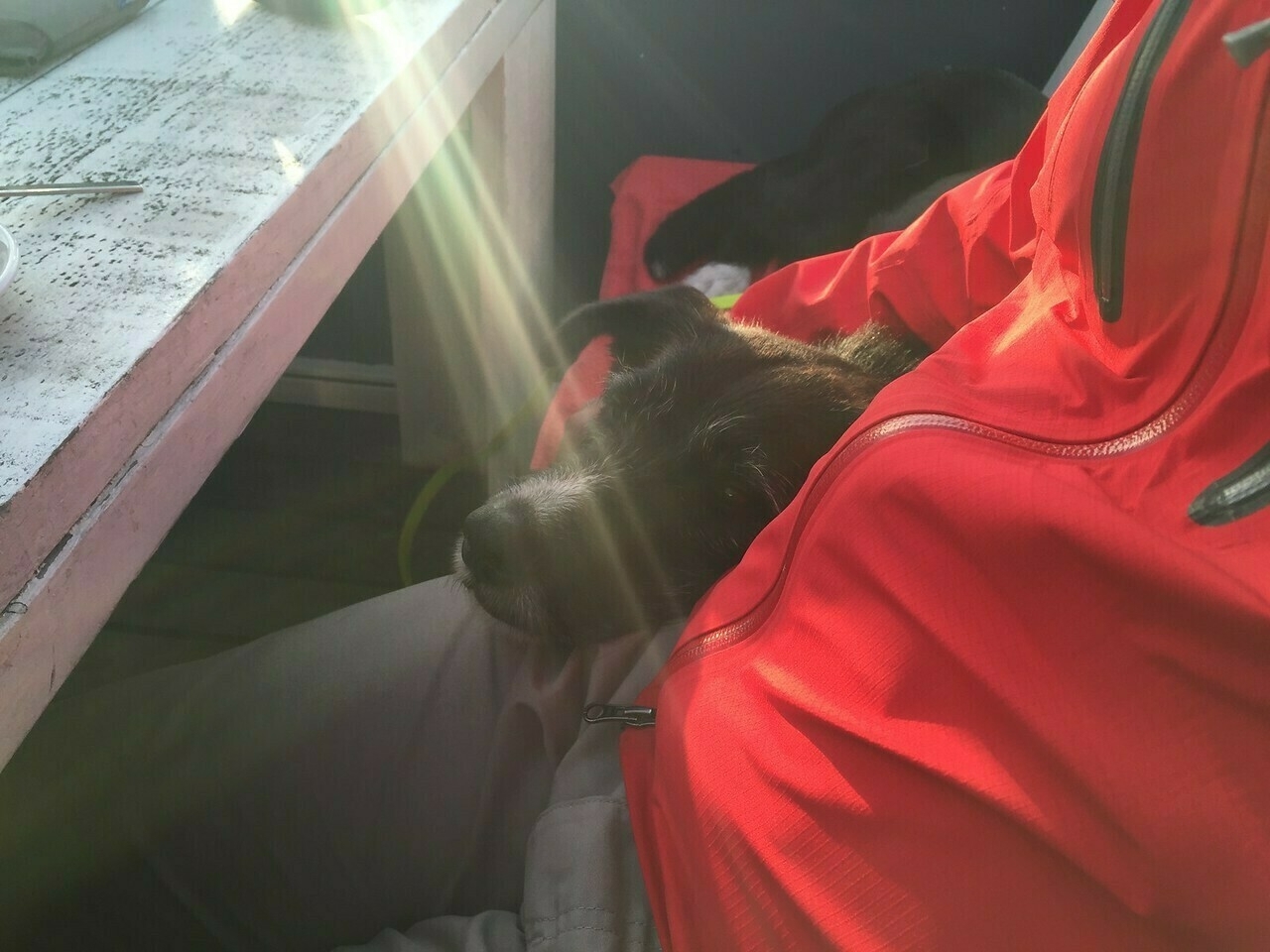 Relaxing after a long day at the beach in the Netherlands

The way she behaved towards the staff of the veterinary clinic was the first indicator that had found an incredible dog. She also has little to no hunting instinct which, on a few occasions, made for fun encounters with cats, foxes, deer, horses, and cows. Especially deer were surprised not to be chased or barked at, to the point of coming closer to us during a few walks.

On the other hand, she's a walking food vacuum and loves to try anything and everything as long as it smells tasty. I do consider this a positive, though, because we can get her to do all sorts of things for food.

I grew up around dogs and have met all sorts. I can say without a doubt that I’ve never met a dog as relaxed as Bijou. She seems to be utterly and completely unflappable. We were particularly happy to see that all she needs to accept a new environment or situation, is seeing me and my girlfriend being at ease.

She’s a bit protective towards us when it comes to other dogs and we found out that she seemingly never learned to play the way dogs usually do. She never reacts aggressively towards playful dogs, though, and she is quick to accept anyone that we consider a part of the pack. Like Mika, a dog from a family member that we had the pleasure of caring for for a few months while they were recuperating from a knee injury. 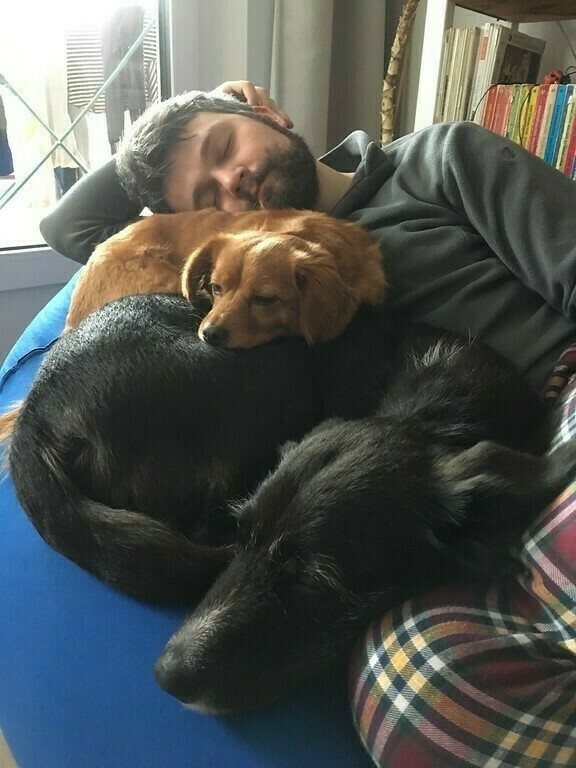 Bijou, Mika, and I napping in the bean bag chair

One thing Bijou never understood, though, is Mika’s obsession with digging in the ground hunting rodents: 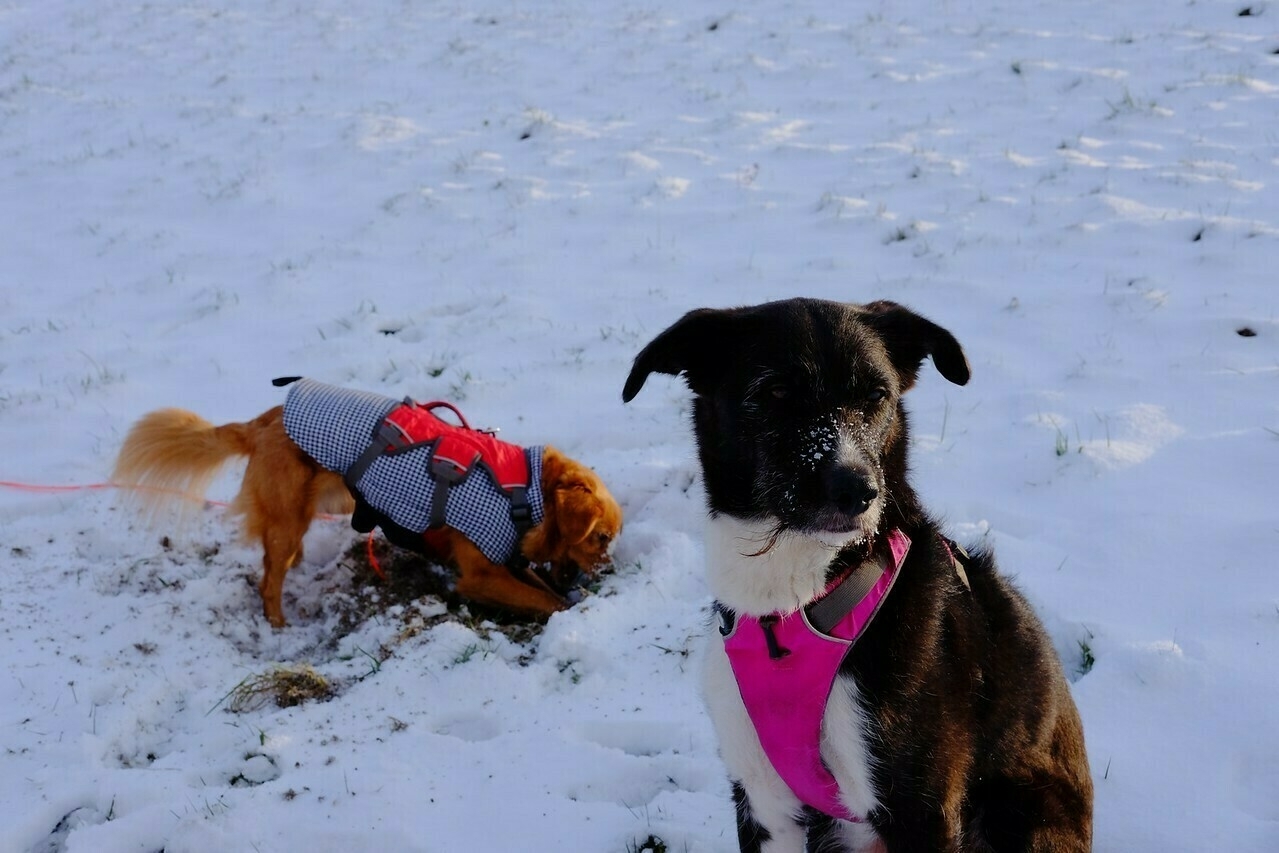 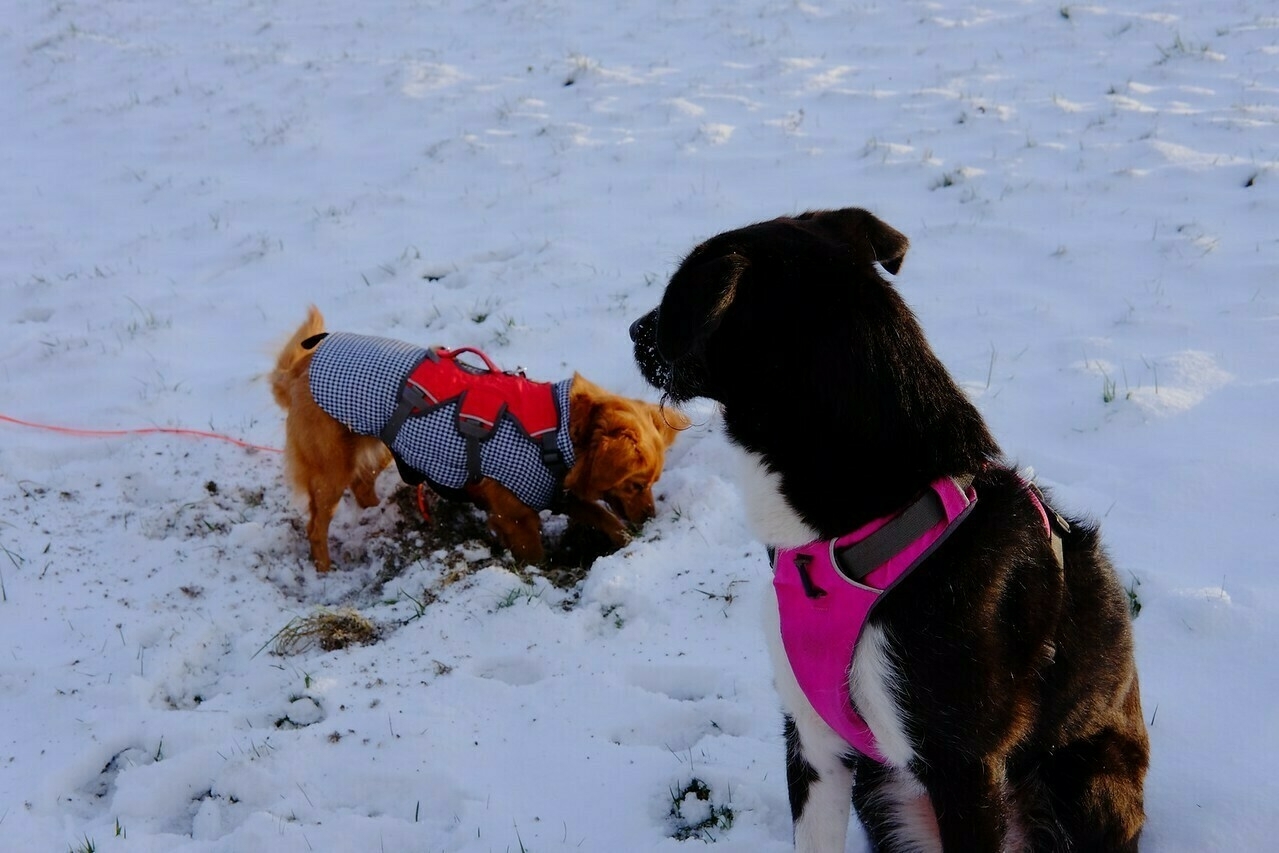 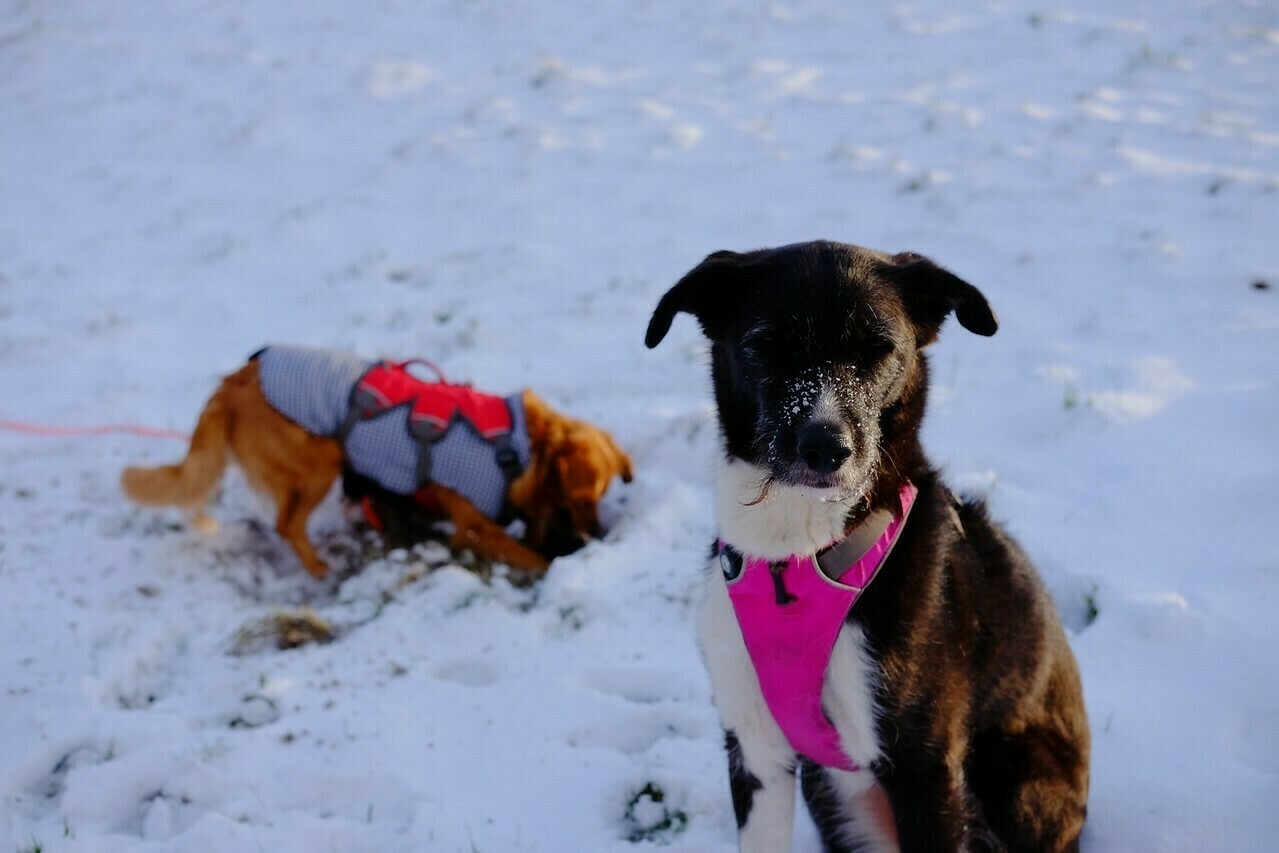 It’s been an eventful first year with her with a few downs and many, many ups. She has enriched our lives immensely in innumerable ways and we hope that she will spend many more years as part of our family. Bijou, watching us eat our Christmas dinner from the couch